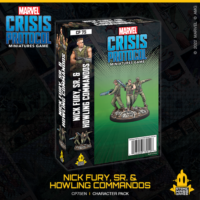 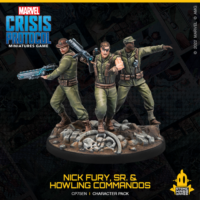 Colonel Nicholas Joseph “Nick” Fury is an elite soldier who has fought as a member of the U.S. Army in theaters across the world. Drawing on his vast combat experience, Fury is a strategic and tactical mastermind who never rests in his mission to keep monsters at bay.

The Howling Commandos are an elite operational unit that has accomplished many great deeds on the field of battle. As a part of the U.S. Military, they fought side-by-side with then-Sergeant Nick Fury as an integrated unit of specialist operatives. Known for completing the most difficult missions regardless of the challenges before them, the Howling Commandos are renowned for their unorthodox tactics and range of combat skills.