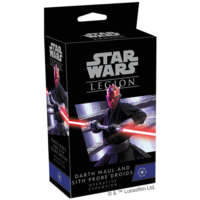 24 in stock (can be backordered)

Fueled by his hatred, Darth Maul operates in the shadows, seeking the right moment to take his revenge on the Jedi. This master of the Juyo form of lightsaber combat wields his iconic double-bladed lightsaber to great effect as his Sith probe droids help him hone in on his next target.

With this expansion, you can dispatch Darth Maul and his Sith probe droids to do your bidding. The beautifully detailed, unpainted Darth Maul miniature can be assembled in three distinct poses while his three signature command cards make him a particularly versatile fighter. Finally, eight upgrade cards let you fully fully explore his dark power.