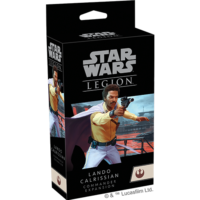 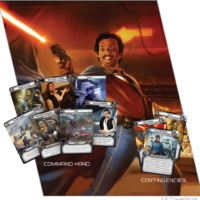 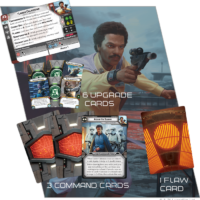 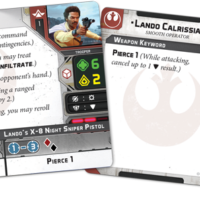 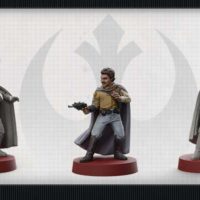 “Everything you’ve heard about me is true.”
–Lando Calrissian, Solo: A Star Wars™ Story

A smooth-talking scoundrel and gambler, Lando Calrissian likes to keep his allegiance close to his chest. But when the chips are down and the galaxy is at stake, he sides with the freedom fighters of the Rebel Alliance. From captain of the Millennium Falcon to Administrator of Cloud City, no leadership role Calrissian has taken on is as important as Rebel general and he brings all this experience to the battles of Star Wars: Legion.

This expansion contains everything you need to add Lando Calrissian as a commander of your Rebel armies, beginning with a beautifully sculpted, unpainted hard plastic miniature that reflects Calrissian’s unique sense of style. Not only will you find three different options for his signature cape, you’ll also be able to choose between two facial expressions and whether or not Calrissian appears reaching for his X-8 Night Sniper Pistol in its holster or has it at the ready.

While the miniature gives Calrissian a unique presence on the battlefield, other components, like his unit card and three signature command cards, represent his history as a gambler and his tendency to take high stakes risks. Finally, Lando Calrissian isn’t one to enter a fight unprepared, and this expansion also includes six upgrade cards that give him access to the gear and training he needs to take on any challenge.