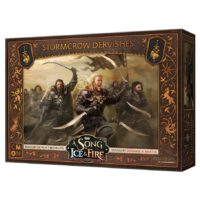 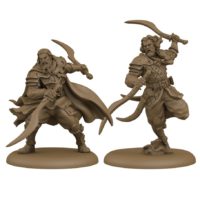 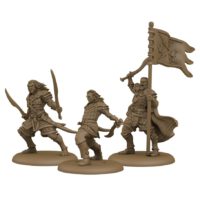 A Song Of Ice and Fire: Neutral Stormcrow Dervishes

The Stormcrow mercenary company is well known throughout all of Westeros for their love of money. When hiring them to fight their battles, the different Houses know how to get the best out of them… simply offer them more coin. The Dervishes are one of the most prized items on the mercenary’s “menu,” being their most veteran skirmishers, ready to fight hard… for a price.

The Stormcrow Dervishes unit box for the A Song of Ice and Fire: Tabletop Miniatures Game gives commanders a new melee unit that they can add to their ranks. Being a Neutral unit, most factions can bring them to the table. With moderate speed, they can make their way quickly to the enemy, where they are the masters of hit-and-fade tactics. They are quite adept with their pair of long knives, hitting reliably and throwing a large number of dice. Like other Stormcrow units, when targeted by the Wealth space on the Tactics Board, they can make a free Attack, making this unit even more deadly.

Be the first to review “A Song Of Ice and Fire: Neutral Stormcrow Dervishes” Cancel reply