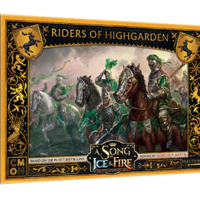 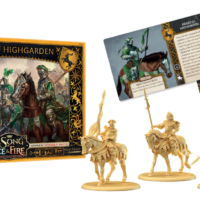 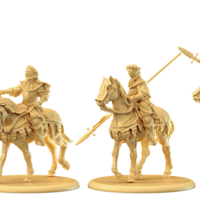 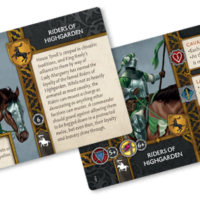 A Song Of Ice and Fire: Riders of Highgarden

House Baratheon is a house divided. Both Renly and Stannis are looking to take over for their deceased brother, Robert, on the Iron Throne. But only one will succeed. For King Renly, one of the many tools in his arsenal are the Riders of Highgarden, thanks to his alliance with House Tyrell through Lady Margaery. Though more lightly armored than many heavy cavalry units in Westeros, the Riders still create a formidable force when baring down on an enemy with their lances during one of their legendary cavalry charges.

The Riders of Highgarden box set for the A Song of Ice and Fire: Tabletop Miniatures Game gives House Baratheon players in support of Renly Baratheon a new cavalry unit to field on the tabletop. Though moderately armored, the Riders are well trained in the use of their cavalry lances. During a charge, they use them to devastating effect, skewering enemy troopers left and right, the enemy’s own armor seemingly useless against such a powerful attack.

Be the first to review “A Song Of Ice and Fire: Riders of Highgarden” Cancel reply