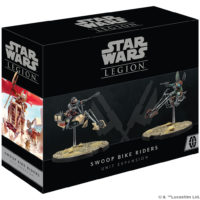 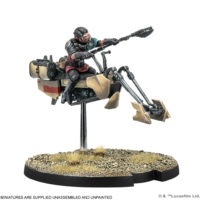 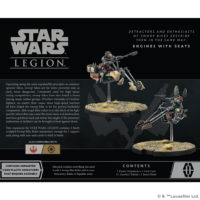 We Price Match - Send us an email
Categories: Pre/Back Order, Star Wars Legion Tags: 2 Players, Miniatures game, Star Wars, Tabletop game
Players speed into the battles of Star Wars: Legion with the Swoop Bike Riders Unit Expansion! Whether criminals or freedom fighters, many groups across the galaxy see swoop bikes as the perfect battlefield companions that make their forces even more mobile. The support unit of two Swoop Bike Riders found in this expansion helps players get their forces into the thick of the fight quickly where they can cause the most chaos and destruction before zooming out before the might of planetary authorities can be brought against them. Able to be fielded by either the Rebel Alliance or gangs of mercenaries, these riders add a fast and furious new element to any army.