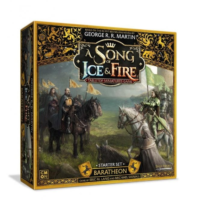 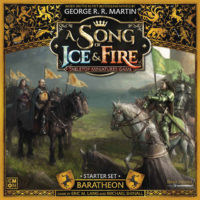 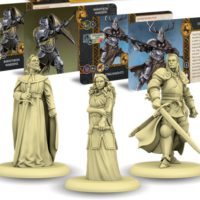 A Song Of Ice and Fire: Baratheon Starter Box Set

Robert is dead. Will a New Baratheon Take the Iron Throne?

The War of Five Kings is on!!

King Robert Baratheon is dead. And while his (alleged) son Joffrey sits on the throne, there are other Baratheon’s who have also made claim to the kingdom. Both Renley and Stannis Baratheon have laid claim to the Iron Throne and they are willing to fight to take it. House Baratheon might be internally divided, but their troops are still just as strong as ever on the battlefield.

The Baratheon Starter Set gives players everything they need to make their claim on the Iron Throne. It comes complete with a rulebook, dice, measuring sticks, stat cards, and miniatures to field a full army in the A Song of Ice and Fire: Tabletop Miniatures Game. Players will get two units of Baratheon Wardens, and a unit each of Baratheon Sentinels and Stag Knights. Along with that, there are Unit Attachments and NCUs, including characters such as Renley and Stannis Baratheon, Alester Florent, Shyra Errol, and more.

Be the first to review “A Song Of Ice and Fire: Baratheon Starter Box Set” Cancel reply