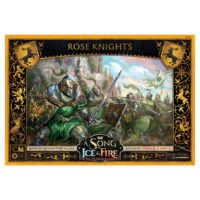 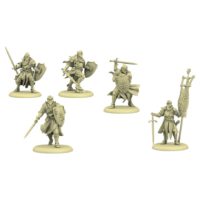 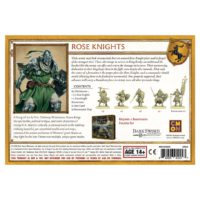 A Song Of Ice and Fire: Rose Knights

House Baratheon is a House divided. However, even at only partial strength, they can field an army that’s more than a match for any other force in Westeros. The Rose Knights are King Renly’s finest warriors. Their armor may seem simply ceremonial, but it is made of the strongest steel, and the soldiers that wear that armor are likewise as tough and dedicated to seeing their King on the Iron Throne.

The Rose Knights unit box for the A Song of Ice and Fire: Tabletop Miniatures Game gives House Baratheon players a new, hardy unit on the battlefield. The Rose Knights will only fight for King Renly, but when they take the field, their strong melee attacks and ability to restore wounds while simultaneously dealing them to the enemy makes them a difficult unit for opposing players to fully wipe out.

Be the first to review “A Song Of Ice and Fire: Rose Knights” Cancel reply