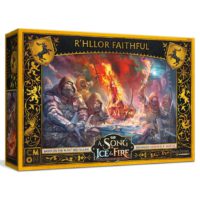 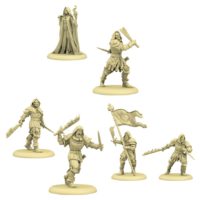 A Song Of Ice and Fire: R’hllor Faithful

The R’hllor Faithful bring their conviction in their god to the battlefield in service of Stannis Baratheon. These holy warriors anoint their blades in sacred oils and set them alight, causing vicious wounds with each slash. Whenever their faith is tested, they only become more deadly to the enemy. Accompanied to battle by a Red Priestess, a unit of R’hllor Faithful is ready to stand against any foe.

The R’hllor Faithful unit box for the A Song of Ice and Fire: Tabletop Miniatures Game gives House Baratheon players a new, faithful unit to add to their ranks. Their burning blades deal terrible wounds to enemy forces with each slash, going through armor easily. The unit can also gain Faith tokens for passing Morale tests, letting them gain access to new special abilities during the fight. The unit comes with the Red Priestess unit attachment, who can send terror through enemy ranks.

Be the first to review “A Song Of Ice and Fire: R’hllor Faithful” Cancel reply